Days of Exchange on Resistance to PPP (JÉR 2017)

After successfull 2013 edition in Avignon and 2015 in Dijon, the R4P network (Network of Reflection and Research on Pesticide Resistance) is pleased to invite you to the third edition.

This meeting is organized for chambres d’agriculture, technicians, coops, technical intitutes and farmers.

Details on the symposium web site 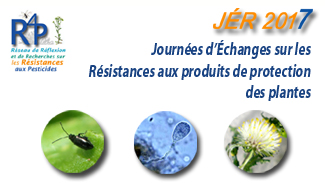 Reports of the meeting in magazines :